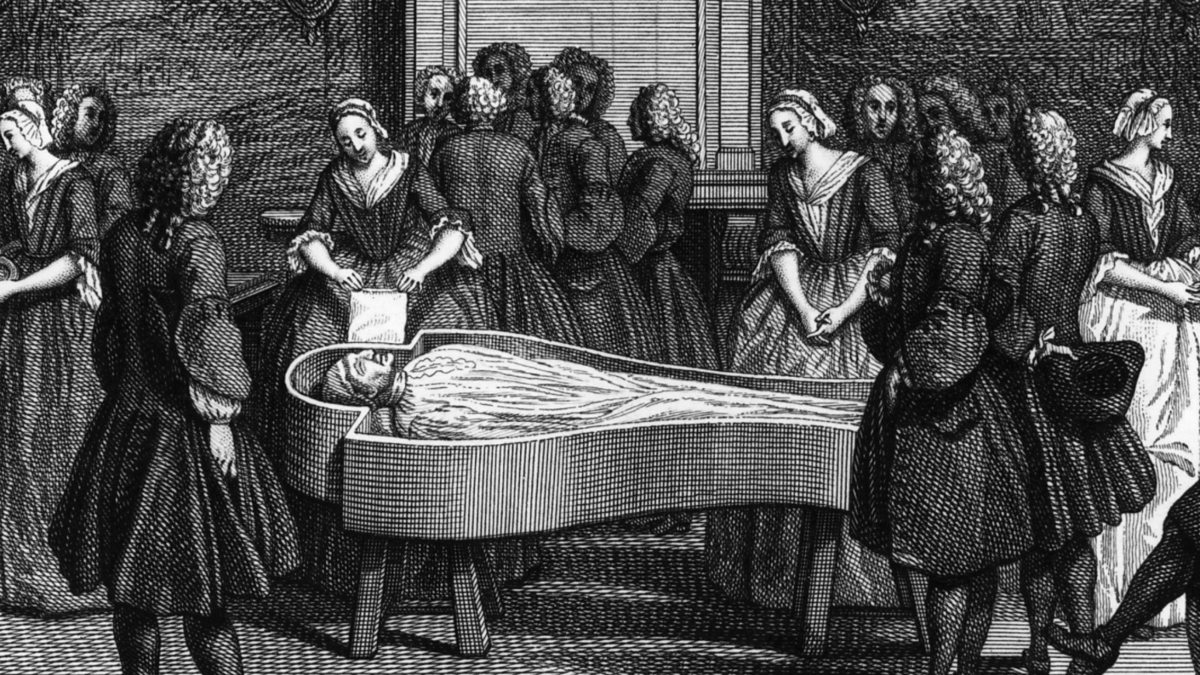 In 19th-century Britain, it was customary during a funeral to provide biscuits for mourners. They were often wrapped and sealed in black wax. Below, you see an example of a funeral biscuit wrapper from 1828 which is now on display at the Pitt Rivers Museum in Oxford.

This strange tradition likely derived from an earlier practice of “sin-eating,” whereby the sins of the deceased were transferred to a person who, for a small fee, consumed food and drink handed to him over the coffin. Mourners would pay the village sin-eater to rid their departed loved ones from all the sins they had accumulated during their lives, thus allowing the dead to enter Heaven unburdened. One early account describes the lost act of sin-eating: “The corpse being taken out of the house, and laid on a bier, a loaf of bread was given to the sin-eater over the corpse, also a maga-bowl of maple, full of beer. These consumed, a fee of sixpence was given for…taking upon himself the sins of the deceased.”

Originally, sin-eating was performed for those who had died unexpectedly, since these people would have had no time to confess their sins before dying. Over time, however, the ritual was performed for anyone who died. This was done not only to expedite the dead’s passage to Heaven but also to prevent the dearly departed from wandering the countryside after death and haunting those they left behind.

The sin-eater was often shunned within his own community. Villagers feared the type of man who was willing to “pawn his own soul” for very little worldly gain. People believed that the sin-eater would become more and more corrupt with each ritual he performed since he willfully carried the sins of the deceased for the rest of his mortal life.

The ritual soon became associated with dark magic as it bestowed human powers over spiritual matters. For this reason, sin-eaters were seen to be operating outside the bounds of Christianity and were often condemned by the Church. The Scottish novelist Catherine Sinclair wrote in 1838 that the men “who undertook so daring an imposture must all have been infidels, willing, apparently, like Esau, to sell their birthright for a mess of pottage.”

The last recorded sin-eater was a man named Richard Munslow, who died in 1906 in Ratlinghope, Shropshire. Unlike many of his predecessors who took on the role of sin-eater out of economic desperation, Munslow came from a relatively wealthy family. He resurrected the practice of sin-eating after three of his children died of whooping cough, and some speculate he did it as a form of grieving. Over time, however, he offered to absorb the sins of the recently departed purely out of kindness and love for his fellow villagers.

In 2010, the citizens of Ratlinghope raised over a thousand pounds to restore Munslow’s grave, which had fallen into disrepair over the last century. It was a final act of kindness for a man who had given so much of himself to his fellow man.