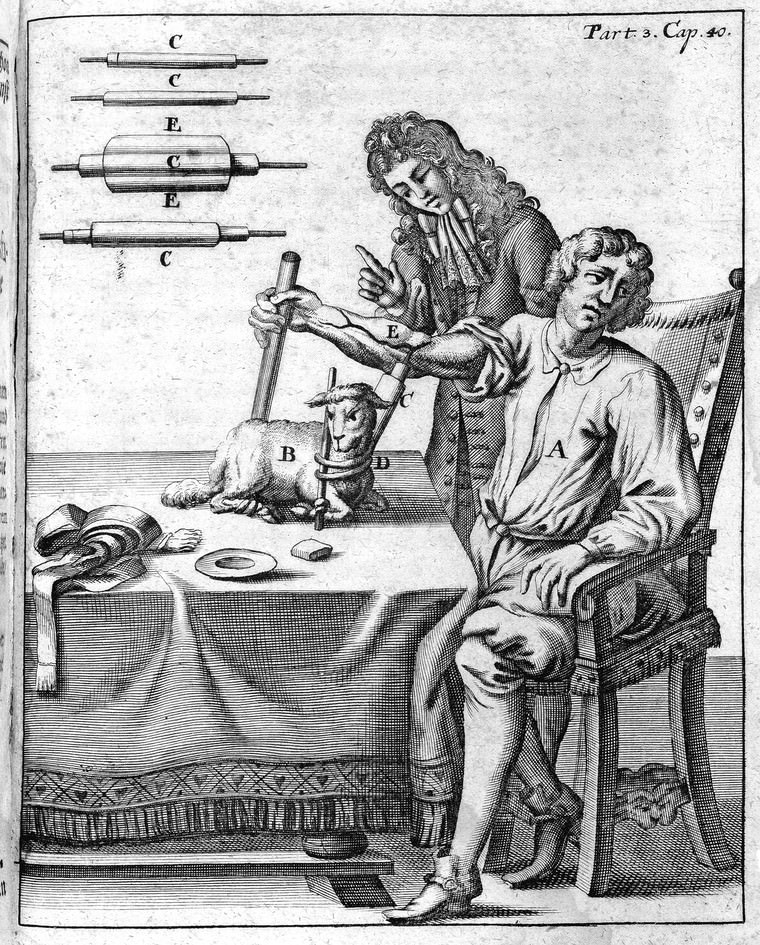 For anyone who has ever uttered the words “the good old days,” this blog post is for you. Here are 10 MEDICAL PROCEDURES FROM THE PAST that will make you happy to be alive in 2019.

10. TOOTH EXTRACTION WITH DENTAL KEY, 18th century. The claw of the key was placed over the top of the rotten tooth. When turned, the tooth popped out of its socket. In many cases, however, the tooth shattered & each piece had to be plucked from the patient’s bleeding gums.

9. BLOODLETTING WITH SCARIFICATOR, late 17th century. This instrument with spring-loaded blades delivered many cuts simultaneously. Afterward, the doctor placed a heated cup over the site. As it cooled, blood was forced out of the wounds. Photo: University of Melbourne

8. RHINOPLASTY using the “Italian Method,” 16th century. This technique involved cutting a flap of skin from the upper arm, reshaping it into a nose, & grafting it to the damaged nasal cavity for as long as 40 days until the flap attached to the face. Photo: Harvard University

7. OVARIOTOMY, first performed in 1809. Surgeons who dared to undertake such an invasive procedure before the discovery of anesthesia were nicknamed BELLY RIPPERS due to the long incision they made across a woman’s abdomen, which frequently invited sepsis and slow death.

6. TREPANATION, [skull, 2200 B.C.]. This involved drilling holes into the skull to alleviate various conditions. Here, the holes in the skull have begun to heal which suggests that although dangerous, this ancient procedure was by no means fatal. Photo: Wellcome Collection

5. ANIMAL TO HUMAN BLOOD TRANSFUSION, 17th century. In 1667, Jean-Baptiste Denis transfused blood from the carotid artery of a lamb into the vein of a teenage boy. The boy survived probably due to the small amount of blood transfused.’

4. ICE-PICK LOBOTOMY, developed by Walter Freeman, 1940s. A pick-like instrument was forced through the eye socket to pierce the thin bone that separates it from the frontal lobes. It could be performed in under 10 minutes without anesthetic.

3. MERCURY BATHS, 19th century. Before the discovery of penicillin in 1928, syphilis was incurable. Many treatments involved mercury, giving rise to the saying: “One night with Venus, a lifetime with Mercury.” Mercury was even injected into the penis via syringes like this.

2. CESAREAN SECTION BEFORE ANESTHESIA. In a Swiss account from the 1580s, Jakob Nufer—a pig gelder—performed the operation on his wife after prolonged labor, and she survived. He used the same instruments he used to castrate his livestock.

1. LITHOTOMY BEFORE ANESTHESIA. This involved passing a metal tube up the penis and into the bladder, then cutting diagonally through the scrotum & extracting the stones. This was extremely painful and only done if the patient’s life was at risk.