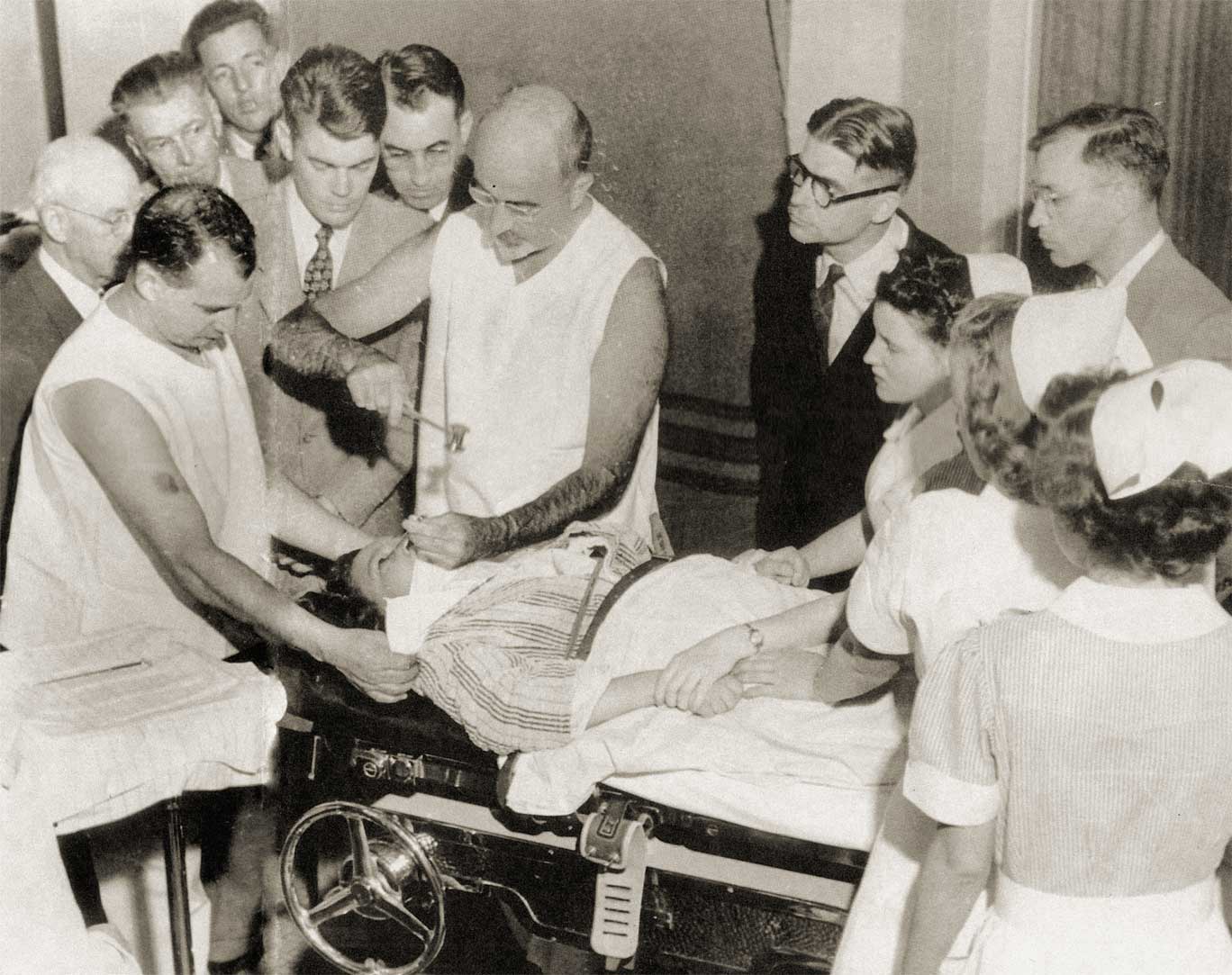 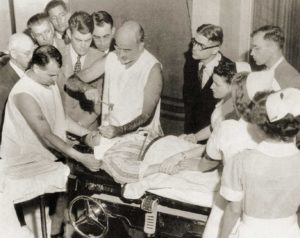 On 12 November 1935, a Portuguese neurologist named Antonio Egas Moniz [below right] became the first individual to perform what would later be known as a lobotomy. Moniz’s work built upon that of the 19th-century Swiss psychiatrist, Gottlieb Burkhardt, who performed a series of operations in 1888 in which he removed sections of the cerebral cortex from six patients under his care at the Préfargier Asylum. Moniz’s early experiments involved drilling holes into patients’ skulls and pouring alcohol into the frontal cortex in order to sever nerves; and coring out regions of the brain with hollow needles.

Moniz’s lobotomy quickly became a popular treatment for various mental conditions, putting an end to the therapeutic nihilism that dominated the psychiatric profession in the Victorian era. Suddenly, doctors believed they could “cure” patients whom they had previously deemed beyond help. Within a decade, the lobotomy became so esteemed that Moniz was awarded a Nobel Prize for his role in developing it.

During this time, Moniz’s procedure was adopted (and adapted) by the American neuropsychiatrist Walter Freeman, who performed the first lobotomy in the United States in 1936. Freeman won acclaim for his technique, and people all over the country began lining up to get their lobotomies, including Rosemary Kennedy [below]—sister to the man who would later become President of the United States. Rosemary was described by members of her family as a rebellious child who was prone to violent mood swings while she was growing up. In November 1941, Rosemary’s father took her to see Freeman, who diagnosed the 23-year-old girl with “agitated depression” and suggested she undergo a lobotomy to correct her erratic behavior. [Interestingly, 80 percent of the lobotomies performed in the US in those early years were carried out on women].

Freeman performed the operation right then and there on Rosemary, without her mother’s knowledge. Shortly afterwards, it became clear that something had gone terribly wrong. Rosemary could no longer speak, and her mental capacity was equivalent to that of a toddler. Her father institutionalized her, telling people that his daughter was mentally retarded rather than admitting that her condition was due to a failed brain operation. It was only after his death decades later that the truth behind her condition was revealed. Rosemary never did recover her ability to speak coherently, and remained in care till her death in 2005 at the age of 86. She was the first of her siblings to die of natural causes.

The incident did little to damage Freeman’s reputation, who soon began looking for a more efficient way to perform the operation without drilling directly into the skull. As a result, he created the transorbital lobotomy in which a pick-like instrument was forced through the back of the eye sockets to pierce the thin bone that separates the eye sockets from the frontal lobes. This procedure—which later became known as the “ice-pick” lobotomy—could be performed in under ten minutes without anesthetic.

Freeman took to the roads with his ice-pick and hammer, touring hospitals and mental institutions around the country. He performed ice-pick lobotomies for all kinds of conditions, including headaches. Eventually, he began performing the operation in his van—which later became known as “the lobotomobile.” At one point, he undertook 25 lobotomies in a single day. He even performed them on children as young as 4 years old. Years later, one of them spoke of the frightful incident: “I’ve always felt different—wondered if something’s missing from my soul. I have no memory of the operation, and never had the courage to ask my family about it.”

Over the course of four decades, Freeman performed nearly 3,500 lobotomies despite the fact that he had no surgical training. Many of his patients often had to relearn how to eat and use the bathroom. Some never recovered. And, of course, there were fatalities. In 1951, one of his patients died when Freeman suddenly stopped to pose for a photo during the procedure. The surgical instrument slipped and went too far into the patient’s brain. Many others fell victim to a similar fate at the good doctor’s hands.

The lobotomy eventually came under attack from the medical community. By the 1970s, several countries had banned the procedure altogether. Freeman eventually retired the lobotomobile and opened a private practice in California. Contrary to popular belief, he never lost his license to practice medicine.

Today, surgical lobotomies are no longer performed. The rise of drugs like thorazine make it easier to lobotomize patients chemically. In recent years, there have been calls for the Nobel Foundation to rescind Moniz’s prize that he received for developing the lobotomy, which has often been labeled one of the most barbaric mistakes of modern medicine.

Special thanks to Paul Koudounaris for bringing this fascinating subject to light for me when I was in Los Angeles this past April.

If you’re interested in the history of surgery, you can now pre-order my book, The Butchering Art. All pre-orders count towards first-week sales once the book is released, and therefore give me a greater chance of securing a place on bestseller lists in October. I would be hugely grateful for your support. If you’re in the US, click HERE. If you’re in the UK, click HERE. Info on further foreign editions to come.